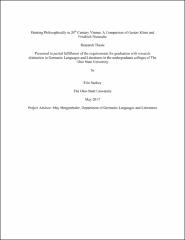 When interpreting a work of art, it is not uncommon that the piece to be labeled philosophical, yet identifying the features which enable visual art to express philosophy is often troublesome. The scandal circling Gustav Klimt’s 1901 painting entitled “Philosophy” elucidates many of these concerns. Commissioned by the University of Vienna as a ceiling painting for the Great Hall, the painting was rejected based on its depiction of philosophical content as well as its form – the faculty expected a painting of philosophers engaged in critical thought and discourse which was done in the Italien Fresco style, but instead were presented with Klimt’s philosophy of life which was done in the then-radical style of the Viennese Seccession. For these reasons, the painting was rejected by the professors of the University of Vienna. Further, the painting is criticized today as a failure in that its style is not innovative enough and because of the painting’s alleged use of allegory; the use of symbol does not, according to the art historian, signify art, but rather instead allows the painting to function merely as a sign. However, Klimt’s “Philosophy” appeals to themes such as eternal recurrence and the struggle for freedom and authenticity found in contemporaneous texts such as Friedrich Nietzsche’s Thus Spoke Zarathustra, which faced similar concerns of form in that it presents philosophical ideas in a modern and unprecedented fashion and lacks a clear argumentative structure as seen traditionally. By appeal to a formal analysis of Klimt’s “Philosophy”, a close reading of influential reviews of the painting, Nietzsche’s Thus Spoke Zarathustra, and contemporary philosophical theories of painting, I argue that one finds a new defense against the argument of “Philosophy” as merely a failed work, and that these parallels not only show “Philosophy” to be a valuable piece of art, but also demonstrate that “Philosophy” is in fact a historical philosophical work. Through this multi-dimensional analysis, I hope to show that through form, painting can express philosophy in a nuanced way which language and literature are unable to present.