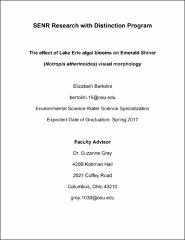 Due to recent increases in agricultural runoff, Lake Erie has been experiencing harmful algal blooms (HABs) with rising severity. The runoff carries excess Phosphorus which is a limiting nutrient in freshwater and a main ingredient in agricultural fertilizers. This nutrient increase has been found to promote large blooms of Microcystis cyanobacteria, or blue-green algae, with the most recently severe blooms occurring in 2013-2015. HABs can negatively impact ecological health; for example, algal turbidity (suspended particles found in water) reduces the light available to aquatic species, resulting in impaired vision and ability to detect predators and prey. The objective of this study was to determine if there are differences in visual morphology between cohorts of Emerald Shiner (Notropis atherinoides) that experienced different levels of HABs during development. I predict that a more severe HAB will result in larger eyes, which, based on previous studies of fish in turbid water might help the fish see better under reduced available light conditions. Emerald Shiner were chosen because they are essential for energy transfer to economically important fish, such as Walleye (Sander vitreus) in Lake Erie and they have relatively short life spans. I analyzed the visual morphology of individual shiners (n=90) collected in 2013, 2014, and 2015 to determine the potential impact of increased algal turbidity. Visual morphology refers to the eye size and size of the optic lobe in the brain. The brain and left eye were removed from each fish, photographed under a stereomicroscope, and measured. Data collected includes the diameter of the total eye and pupil, and the axial length of the eye. The results of this study show that pupil diameter was significantly larger in fish collected one year after a severe HAB.