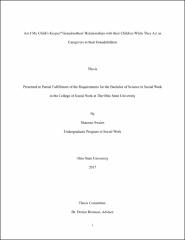 This thesis explores the relationship dynamics between grandmothers who act as kinship caregivers for their grandchildren and the biological parents who have given up or lost custody of these children. As of 2015, there are nearly 2 million grandmother kinship caregivers in the United States (US Census Bureau, 2015). This study implements a narrative approach and a mixed-methods research design, consisting of two surveys followed by an individual interview with current grandmother kinship caregivers (N = 7). The surveys describe the caregivers’ wellbeing and demographics, while the interviews focus on the following topics: general nature of the grandparent-parent relationship, changes in this relationship, feelings towards the parent, parenting role, services accessed or needed, and the impact of this relationship on the grandchild. Thematic coding was used to analyze each interview and highlight different areas of strength or need as expressed by the participants. Results indicate that the grandmothers have a strong influential presence over their adult child, feel conflicted over whether to prioritize the safety of their grandchild over the safety of their adult child, and were hesitant to use the word “anger” when expressing their feelings. All participants acknowledged the lack of resources available to support their relationships with the birth parent; however, the need for such services was not a high priority for them. Given the number of grandmothers who are kinship caregivers, their strengths and needs continue to be an important discussion in child welfare.