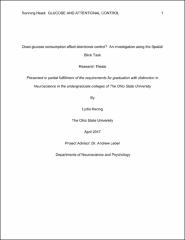 Previous evidence shows that cognitive functions such as memory are improved by glucose consumption, suggesting these functions are dependent on energy metabolism. However, it is not clear whether glucose influences attentional control. Attentional control is the ability to allocate attention to relevant information and ignore irrelevant information. In this study, we test the effect of glucose consumption on performance on a Rapid Serial Visual Presentation (RSVP) task. In this demanding attentional control task, participants identify a target letter of a specific color appearing in a series of rapidly presented letters in different colors. This task requires strong attentional control to focus on the target color and ignore irrelevant colors. A colored outline square surrounding the RSVP stream, the “distractor,” appears at different time points before or after the target letter. If the distractor matches the target color, the participant’s attention is captured, resulting in reduced accuracy. In this double-blind within-subject study, participants complete two sessions. In random order, participants are assigned a glucose drink and a placebo drink. Date replicate the capture effect and demonstrate that it extends into our modified paradigm. The results showed no effects of drink consumed on performance on the RSVP task. Glucose did not cause a faster disengagement from distractors. These results, combined with other recent studies, cast doubt on the relationship between glucose consumption and cognitive function (Kurzban, 2010).