Exploring Sources of Contamination in Kepler Surveys for Stellar Rotation 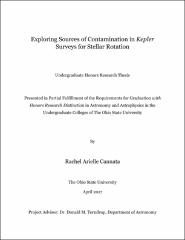 Large scale surveys, such as Kepler, have measured thousands of rotation periods for stars in various evolutionary states, providing plenty of data for studies on rotational spin-down. Current models of rotational evolution due to magnetic braking model all stars as single. However, these models may not be accurate in the rapidly rotating regime because they fail to consider the different evolution of stars in close or tidally synchronized binaries. Additionally, Kepler’s broad pixels introduce possible sources of contamination (period misattribution) from fainter stars near or collinear with the target, which could be contributing a fraction of the light but all of the variability. I present an ongoing pilot study on the extent of contamination and binarity among the rapidly rotating (P < 10 days) portion of the García et al. (2014) sample of subgiants, as determined by spectral energy distribution excesses and a radial velocity survey. We find that 4% of subgiants have W4 excess, but none show W2 or W3 excess indicative of secondary stars. To a precision of 40 km/s we find no binaries, but as we work on a complex wavelength calibration we hope to increase precision to 10 km/s and reexamine the data.

This research was funded by an ASC research scholarship.