What Keeps Columbus Cooking? A Survey of Cooking Behavior 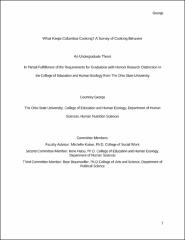 In the last thirty years, the U.S. has seen a rapid decline in home scratch cooking alongside a rise in chronic non-communicable diseases such as heart disease, diabetes, and cancer; yet little research has been done to assess cooking behavior and its possible effects on chronic disease. The purpose of this research is to ascertain the factors contributing to cooking behaviors among adults in Ohio State University campus area of Columbus, Ohio. This study included 150 participants, recruited at three different sites: a natural foods grocery store, a fast food business, and a food pantry. After providing consent, each participant completed questions that collected data on sociodemographic characteristics, cooking behaviors, and factors promoting or hindering scratch cooking. Study data was analyzed using chi-square tests. Results showed that a majority (72%) engaged in scratch home cooking for more than 50% of their meals. Health was the most frequently reported factor contributing to participants’ scratch cooking behavior while time was the most frequently reported factor that hindered home cooking. Skill was the lowest rated factor for all demographics. Students cooked at home from scratch significantly less than non-students (31% v 81%; p < 0.00001). The differences in cooking behaviors based on race or income were not significant. Cooking behaviors were similar for participants at food pantry and high-end grocery store, while it differed greatly for those at a fast food restaurant (p = 0.000382). Since health was the main factor behind participants’ scratch cooking, researchers and nutrition practitioners need to continue to find avenues for the promotion of healthy cooking behaviors within this population, while addressing the other barriers, such as time and money. The population in greatest need of intervention are younger people and students. Further research needs to be done on establishing proper standardized methodology, cooking definitions, addressing diverse populations, and studying various locations in the U.S.