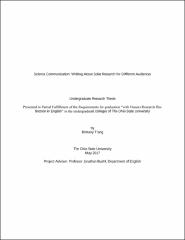 This thesis is a portfolio of science-writing documents accommodating the content of my honors undergraduate chemistry thesis ("An Indium Tin Oxide-Compatible Organic Dye for p-Type Dye-Sensitized Solar Cells" http://hdl.handle.net/1811/80701) for different audiences in different genres. This portfolio consists of the following documents: a press release (as would be written by an institution’s research communications office for a site such as EurekAlert), a magazine article (as would be written by a scientific journalist for a magazine such as Scientific American), a grant proposal (as would be written by a research group/principal investigator for a grant from the National Science Foundation), and a graphical abstract, also known as a "Table of Contents (TOC) image" (as would be designed by a researcher for an article appearing in the Journal of the American Chemical Society).