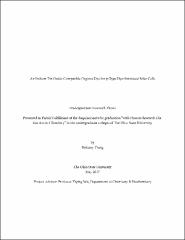 P-type dye-sensitized solar cells (DSSCs) lack the high currents and efficiencies of their n-type DSSC counterparts. The main obstacle for p-type DSSCs is their nickel oxide (NiO) semicon-ductor. NiO parasitically absorbs light and is a poor charge conductor. On the other hand, indi-um tin oxide (ITO) is a much better charge conductor and is more transparent. Switching from nickel oxide to indium tin oxide would increase the efficiency of p-DSSCs, but there are no high-efficiency, recombination-preventing organic dyes that have highest occupied molecular orbital (HOMO) levels negative enough to efficiently interact with the ITO conduction band and produce good current. In this project, we engineer the HOMO level of an organic dye so it is compatible with ITO and investigate the dye’s synthesis. Over the course of the dye’s synthesis, it became evident that the crucial carbon-nitrogen bond between the diphenylamine and the thiophene is very sensitive to the electronic properties of the diphenylamine reactant. To satisfy the needs of both the reaction and the final dye, we introduced an “asymmetric” diphenylamine that contains a tert-butyl ester on one phenyl group and a methoxy group on the other. The tert-butyl ester can easily be deprotected into the necessary carboxylic acid anchoring group, while the electron-donating methoxy group facilitates the C–N bond formation. This reaction proceeds in good yield (59%) and enables the synthesis of a short-synthesis, six-step dye for high-efficiency ITO-based p-type DSSCs.