"We Europeans": Signal Magazine and Political Collaboration in German-occupied Europe, 1940-1945 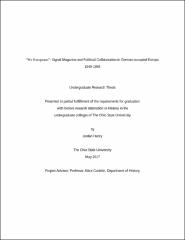 Within the vast body of scholarship on the Second World War, the most groundbreaking research in recent years has explored the complex relationships between Germans and the peoples they conquered. While European historians have traditionally focused on national resistance movements during the war, the topic of collaboration with the Nazi regime has remained controversial. My research tackles this contentious subject by examining the relationship between the French and German press industries, using the history of a German propaganda publication, Signal magazine, as a case study. Signal was a photojournalism magazine published by the German Army between April 1940 and April 1945. The magazine was printed by local publishing houses throughout Europe, relying on collaborative networks between Germans and other Europeans. The scholarship on this history is surprisingly sparse: only a handful of articles in French and German exist, with English scholarship virtually non-existent. In this study, I seek out both the material conditions of the magazine’s publication and the ideological underpinnings of its contributors. Through the analysis of archival materials in Washington, D.C. and Paris – including German occupation records, U.S. military records, and French legal documents – I uncover the French and German journalists, photographers, and businessmen who contributed to the magazine. In conjunction with secondary sources, I use this information to reconstruct a coherent narrative for the magazine. Although current scholarship distinguishes distinct categories of cooperation with the enemy, ranging from accommodation to outright collaboration, my research suggests that a more nuanced approach must be made; for some contributors, working for the Nazi regime blurred the lines between collaboration and personal and professional survival. This project adds to our understanding of collaboration by shedding new light on how those in the press industry viewed their place within the Nazi New Order.