Scholarly Propagation of Literary Poetry in Modern and Romantic Periods 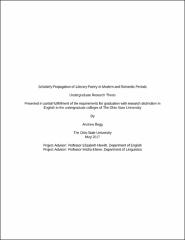 What makes a line of poetry quotable in literary scholarship? Does a line’s position in relation to the poem affect its quotability and, therefore, its significance? Does a poem’s time period play a role in how scholars propagate poetry? To answer these questions, I created a corpus of 250 poems from The Poetry Foundation, a database of more or less popular poems published in English, from both the Modern (roughly 1902-1965) and Romantic (roughly 1750-1870) time periods—standard, recognized periods of literary scholarship. The JSTOR database was then selected to find scholarly propagation of each line of each poem in my poetry corpus: a search was done through JSTOR for the exact phrase of a line of poetry in documents which also included the author’s name. Results were then recorded and graphed against the percentage a line occurred at through the poem in which it was found. I have found that a sonnet’s structure is typically reflected in scholarly propagation, albeit with some nuances. I have also found that poems of the same line length within the same literary period typically follow the same propagation pattern; however, I have found that widely anthologized poems, such as “Ozymandias” and “Anecdote of the Jar” transcend this pattern, suggesting that the presence of scholarly propagation alters how scholars view a poem. Finally, variation between the Modern and Romantic periods suggest that scholarly propagation differs between the two periods. Thus, scholarly poetic propagation, and therefore interpretation, is somewhat predictable in relation to a poem’s form and literary period.