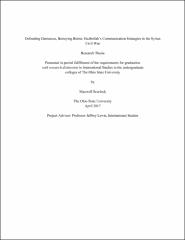 The Syrian Civil War, which began in 2011, has devolved into a vicious conflict between the predominantly Sunni Muslim Syrian opposition, Bashar al-Assad’s Syrian government, and each side’s external supporters. One of these external supporters is Hezbollah, a Lebanese Shi’i Muslim political actor and militia that intervened militarily in support of the Syrian regime in 2013. Strategically, Hezbollah depends on its Syrian ally remaining in power, though the group’s support of the unpopular Syrian regime has led to political ostracization and to retaliatory terrorist attacks targeting Hezbollah population centers in Lebanon. This project analyzes Hezbollah’s communication strategies from 2013 to 2014, examining in particular the group’s framing of its contradictory goals of supporting the Syrian regime and providing security to its constituents. Hezbollah interviews and speeches, multiple of which were translated by the author from Arabic into English, were used to evaluate the strategies employed by the group and how these strategies parallel and differ from those it has historically utilized. Various regional newspaper articles and internet communications were used to provide context. Hezbollah has sought to explain its participation in the Syrian conflict by highlighting its founding identity as a bulwark against Israeli domination of Lebanon and a supporter of threatened Muslims. The preliminary findings indicate that Hezbollah has pursued two distinct but related strategies in order to highlight its founding identity within this new context. First, the group has alleged a conspiracy, largely designed by Saudi Arabia, Israel, and the United States to destroy the region. Second, Hezbollah has redefined its identity from a solely a supporter of threatened Muslims to a supporter of threatened Muslims and Christians alike. This work demonstrates the challenges imposed upon externally-sponsored actors and the ability of these actors to respond to these challenges through shrewd communications strategies and effective identity manipulation.