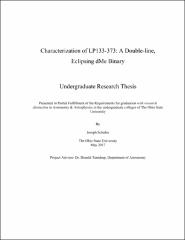 Angular momentum loss in stars and star systems can have a significant influence on their evolution. In single stars it causes them to spin down. In multi-star systems it drives the stars inward. This can cause the stars to cease to evolve independently of one another, and, in extreme cases, merge. While the physics of angular momentum loss in stars is poorly understood, it is still possible to measure the rate of loss and probe the mechanisms that drive it. Magnetic stellar winds are one such mechanism in magnetically active stars. The star’s winds couple with its magnetic field, and rotate with the star out to large distances carrying away angular momentum. In this study we examine the effects of magnetic stellar winds in the eclipsing low-mass binary system LP133-373. In an eclipsing system, it is possible to quantify the rate of angular momentum loss by measuring the decrease in time between consecutive eclipses. As the system loses angular momentum, and the stars move inward, the time between successive eclipses decreases. To accurately measure orbital period changes due to angular momentum loss in LP133-373, we have more than doubled the number of eclipse timings of this system and increased the monitoring period by over thirteen years. We present observed period changes in LP133-373, derived from our new eclipse timing data, and a comparison calculation of the expected angular momentum loss based on stars of similar masses and rotation periods. Additionally, we present an in-depth characterization of both components of LP133-373. We have obtained over a hundred new spectra of this system allowing us to significantly improve the existing radial velocity solutions, and thus the mass estimates, for both stars.