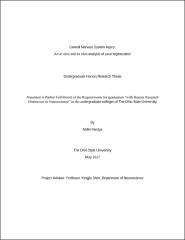 Extensive damage to a developed spinal cord can be devastating. The axons of nerve cells cannot regenerate effectively following injury, leading to impaired sensation and/or movement. More research is needed on the mechanisms underlying injury, and promising therapeutics are still lacking. Many molecules have been implicated in the inhibition of growth at the injury site. One such class of molecules are Chondroitin Sulfate Proteoglycans (CSPG). Interestingly, another group, Heparin Sulfate Proteoglycans (HSPG), has been shown to be growth promoters that act on the same receptor, Protein Tyrosine Phosphatase Sigma (PTPSigma). Given this literature, it is seen that PTPSigma acts in a bimodal manner by binding both a growth inhibitor (CSPG) and growth promoter (HSPG). The purpose of the first part of the project was to test whether the injection of additional HSPG, named Glypican-2, at the injury site of a rat spinal cord will alter the signaling of PTPSigma to favor axon growth and counteract the inhibition of CSPG. We found that Glypican-2 promoted axon growth for tyrosine hydroxylase (TH) and serotonin (5HT) fibers while mitigating the dieback of corticospinal tract (CST) fibers. Furthermore, tau and Alzheimer’s Precursor Protein (APP) have been linked to growth inhibition of neurons following injury. When compared to levels of CST dieback, the decrease in tau and APP levels with treatment show a significant connection. This suggests that GPC-2 may be mitigating the normally negative effects that these proteins have post-injury on neuron growth. These data support Glypican-2 as a promising therapeutic for spinal cord injury. Furthermore, current models often utilize a dorsal root ganglion (DRG) culture or an embryonic cortical neuronal assay to assess axon growth. Because the growth potential of adult neurons are much lower than the embryonic, and it is much more difficult for CNS neurons to survive and grow their axons, it is imperative to formulate an ex vivo assay for adult CNS neurons. The second part of the project consisted of developing an ex-vivo central nervous system (CNS) culture with electrical stimulation to further examine the effects of inhibitors such as CSPG in a novel model outside of the organism. The progression of this project was halted by limited solidification of collagen gel, which was needed to suspend the nervous tissue. While substantial data was not collected at this stage, the study was still valuable in providing insight into the potential issues that may result in ex vivo study and opportunities for modifications.