Saliva from healthy men and women after exposure to three amorphous black raspberry confections: an analysis of salivary kinetics and polyphenol profile in oral cancer prevention 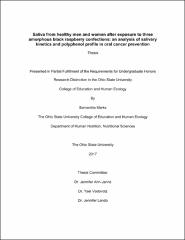 According to the American Cancer Society, an estimated 49,670 Americans will be diagnosed with oral cancer in the year 2016. Oropharyngeal cancer remains to be in the top ten most common cancer types and currently is the eighth most prevalent cancer in the United States. Oral cancer is regarded as a “lifestyle disease”—one that many dental professionals believe can be both caused and prevented by modifiable behaviors such as diet and oral hygiene practices. Previous studies have identified tobacco and alcohol use as risk factors for oral pharyngeal cancers; yet diets rich in fruits and vegetables have shown to reduce the risk of oral cancer. Among the many black raspberry (BRB) has shown in previous rodent studies, anticancer activities toward oral cancer by inhibiting tumor development and downregulating genes involved in angiogenesis. Prolonging oral residence time using a confectionary matrix is one strategy to extend exposure of BRB compounds in the mouth, which arguably could enhance BRB absorption and reduce quantity of BRB needed for efficacy. However, some studies suggest that longer exposure in the oral cavity can enhance degradation of BRB compounds thereby diminishing their bioactivity. Therefore in this study, polyphenols in saliva were quantified and characterized after oral tumbling of three confectionary matrix having three different rates of release (slow, intermediate, and fast). We hypothesized that the confectionary matrix (modulated by the amorphous form) which provides the greatest oral residence time would cause greater quantities of BRB polyphenols to partition into the saliva and subsequently into the oral cavity and to the rest of the body. The following objectives were met: to determine the impact of oral residence time on the polyphenol profile of saliva in men and women after consumption of three BRB confections and to evaluate the role of fruit and vegetable intake as well as oral hygiene practices on polyphenol profiles in saliva. In a four-week, randomized, phase I study, 30 men and 30 women, (non-smokers) evaluated three amorphous confectionary forms having three different release rates (prolonged, intermediate, rapid), each containing 1.25g freeze-dried BRB. HPLC with tandem mass spectroscopy was used to quantify and profile BRB compounds and metabolites from the confections and saliva. All confections were well accepted. Oral residence time was 74% longer and saliva volume was 42% greater with glassy than the other two forms. Fifteen polyphenols were identified in saliva. Saliva after hard candy consumption had significantly (p≤0.05) higher ellagitannin and methyl ellagic acid malonyl pentoside compared to the other two confections. Extending oral residence time enhanced salivary concentration of polyphenols, suggesting that confections with extended release of BRB compounds may be a good strategy for future oral cancer prevention trials.