A Literature Review of the Association Between the Mediterranean Diet and Cancer: The Tale of Two Regions 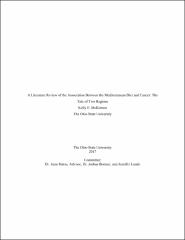 According to the World Health Organization (WHO), cancer is the second leading cause of death worldwide after cardiovascular disease. Among women and men, breast and prostate cancers are respectively the most commonly diagnosed and the leading causes of death (WHO, 2017). Much research has been conducted in an attempt to determine the risk factors affecting the initiation, promotion, and proliferation of tumor cells. Obesity has been identified as one such modifiable risk factor. Evidence from studies investigating the relationship between body-mass index (BMI) and the risk for developing 22 different types of cancer shows that a higher BMI is associated with a greater risk of cancer diagnosis (Bhaskaran et al., 2014). Obesity is highly prevalent in the United States and also continues to rise globally. However, in Europe, particularly in the Mediterranean region, the obesity rates are lower than that of the United States. In addition, cancer incidence and mortality rates are lower in these regions. Thus, attention is drawn towards the differences in dietary lifestyle between the United States and the Mediterranean regions. This literature review described and compared cancer disease outcomes among populations consuming the Mediterranean diet against those populations consuming the Westernized diet. Studies were identified using the search engines PubMed, EBSCOhost, and WorldCat@OSU, and the topics focused on were on the Mediterranean and Westernized dietary patterns in relation to cancer development, outcome, and mortality. Evidence from this literature review shows that individual adherence to a Mediterranean diet both in the Mediterranean region and the United States was associated with a decreased cancer risk and mortality. The adoption of the Mediterranean diet as part of a healthy lifestyle needs to be encouraged among Americans as part of an intervention for reducing cancer risk and/or improving disease outcomes.