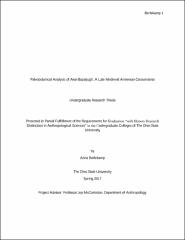 This project analyzes the paleobotanical remains from the medieval Armenian site, Arai-Bazarjugh, in order to create a detailed botanical description of the environment and the human activities of the caravanserai represented in the plant remains. Arai-Bazarjugh was a medieval Armenian caravanserai, or traveler’s inn commonly used as a safe place for traders to stay, occupied from the thirteenth century and eventually abandoned in the mid – fifteenth century. The paleobotanical samples were sorted and identified to family or genus. After identification, each category was counted and recorded to compare these results across all samples to track the occurrence of different families of plants across the entire site. Wheat and barley were the most frequently encountered cultivated taxa. Millet was also identified in a high number of samples, indicating seasonality in agriculture. Other agricultural seeds were found in small quantities, including legumes, fig, date, pomegranate, almond, olive, grape and cotton. The wild and weedy taxa identified was very diverse, but Rumex sp. and the Cyperaceae family occurred in the greatest number of samples. Other weedy and wild types indicate a diverse landscape with rivers and river beds, open pasture lands, and woodlands. Nearby the Arai-Bazarjugh caravanserai, a medieval village was excavated and future analysis of the archaeobotanical remains will allow for comparison between the two sites to further determine the location of processing, what crops and other botanical goods were being trade, which taxa were being kept for local use, and how this changed over time. There is little archaeological research analyzing the botanical remains from Armenia during the Medieval Age, especially when studying the caravanserai. A general description of the site is needed and further research must be conducted in the region before comparison is possible.