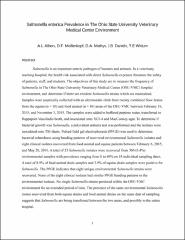 Salmonella is an important enteric pathogen of humans and animals. In a veterinary teaching hospital, the health risk associated with direct Salmonella exposure threatens the safety of patients, staff, and students. The objectives of this study are to measure the frequency of Salmonella in The Ohio State University Veterinary Medical Center (OSU-VMC) hospital environment, and determine if there are resident Salmonella strains which are maintained. Samples were aseptically collected with an electrostatic cloth from twenty combined floor drains from the equine (n = 10) and food animal (n = 10) areas of the OSU-VMC between February 16, 2015, and November 3, 2015. The samples were added to buffered peptone water, transferred to Rappaport-Vassiliadis broth, and inoculated onto XLT-4 and MacConkey agar. To determine if bacterial growth was Salmonella, a polyvalent antisera test was performed and the isolates were inoculated onto TSI slants. Pulsed-field gel electrophoresis (PFGE) was used to determine bacterial relatedness using banding patterns of recovered environmental Salmonella isolates and eight clinical isolates recovered from food animal and equine patients between February 6, 2015, and May 20, 2016. A total of 23 Salmonella isolates were recovered from 360 (6.4%) environmental samples with prevalence ranging from 0 to 40% on 18 individual sampling dates. A total of 8.9% of food animal drain samples and 3.9% of equine drain samples were positive for Salmonella. The PFGE indicates that eight unique environmental Salmonella strains were recovered. None of the eight clinical isolates had similar PFGE banding patterns to the environmental isolates. No single Salmonella strains persisted within the OSU-VMC environment for an extended period of time. The presence of the same environmental Salmonella clones recovered from both equine drains and food animal drains on the same date of sampling suggests that Salmonella are being transferred between the two areas, and possibly to the entire hospital.