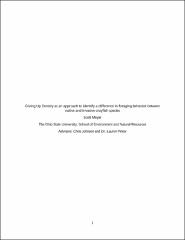 Invasive species are often thought to displace native species by being superior competitors through aggression and resource exploitation. In freshwater ecosystems, invasive crayfish have been frequently shown to displace native crayfish by outcompeting them for food resources. Here, we tested the hypothesis that the displacement of native crayfish, Orconectes sanbornii, by invasive crayfish, Orconectes rusticus, in Ohio streams may be due to superior foraging behavior of the invader. We also examined whether foraging behavior changed in the presence of a model fish predator. We ran a lab experiment where we used depletable food patches to compare the foraging behavior of native O. sanbornii and invasive and native populations of O. rusticus under high, low or no predation risk. The amount of food remaining in a patch after approximately a 24-hour period was used as an indication of giving up density (GUD) to measure crayfish foraging behavior under predation risk. Results indicated that there was no effect of predation risk on the GUD of either species (F 2,80 = 0.147, p = 0.86). However, native O. sanbornii left lower GUDs on average than either native or invasive populations of O. rusticus (p = 0.003, p = 0.026, respectively). This suggests that the native O. sanbornii is a more active forager than either a native or invasive population of O. rusticus. This suggests that O. rusticus might not be displacing O. sanbornii through exploitative competition but rather an unidentified mechanism. Gaining a better understanding and being able to better identify the mechanisms of species invasions can lead to better and more effective management of invasive species in the future.