The Influence of Ensemble Statistics and Focused Attention on Feature Perception 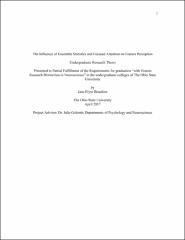 Ensemble statistics are a means by which our brains can take the average across features such as color (De Gardelle & Summerfield, 2011), size (Chong & Treisman, 2003), and texture (Alvarez & Oliva, 2009) to help us retain the gist of a scene without relying on effortful processing of every object. Previous research has also shown that features such as color appear to be mixed together when attention is split (Golomb et. al, 2014). We wanted to examine how focused attention versus split attention would influence the use of ensemble statistics and feature mixing. To test this, subjects fixated on the center of a computer screen and three squares appeared in their periphery. Either all three of the squares became bold (a split-attention trial) or just one became bold (a focused-attention trial), and subjects were asked to direct their attention to the bold square(s). Each square was then briefly filled with a different color, and subjects were asked to report the color in one of the squares by choosing between two response colors (Experiment 1) or clicking along a color wheel (Experiment 2). Experiment 1 did not show significant effects of the ensemble mean on either attention condition, but this may have been due to a less sensitive experimental design. In Experiment 2 we could fit the distribution of responses with probabolistic models, allowing us to examine differences in guess rate, precision, swapping errors, and shifts toward the ensemble mean. Focused-attention trials showed a decrease in overall noise, with lower standard deviations (precision) and guessing rates. Focused-attention trials also showed a decreased frequency of “swap” errors (reporting one of the distractor colors instead of the target color). We found some evidence that subjects tended to report a color shifted toward the ensemble mean, but there was no significant difference in this measure for focused-attention trials and split-attention trials. These results suggest that ensemble statistics can bias the perception of features by drawing them toward the ensemble mean, and focusing spatial attention does not appear to modulate this effect. Future experiments will test whether this trend persists for larger ensembles containing more objects and different distributions of distractor colors.