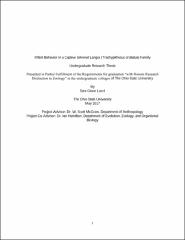 There have been few studies on the development of infant behavior in colobines. This paper seeks to understand the behavioral development of the silvered langur (Trachypithecus cristatus), a colobine native to Southeast Asia. The study group consisted of two adult females, a male and female infant, and the adult male father. The null hypothesis was that there would be no difference in behavior between the male and female infant. Based on previous research, predictions were that the two infants would differ in activity, sociality, and maternal interaction. Data on behavior were recorded for each individual between January and August, 2016. Proportions of observed behaviors were calculated for each individual for each day and used to generate histograms. Contrary to previous studies, the two infants showed nearly identical proportions of almost every behavior, including grooming, feeding, activity, and maternal contact. However, this may be due to maternal style, personality differences, or late onset of sexually dimorphic behaviors. These results highlight the need for further study of infant development in colobines.