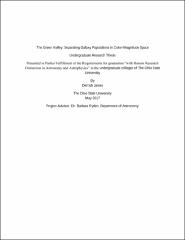 Luminous galaxies can be classified as one of two types: early type and late type. Early type galaxies are primarily quiescent ellipsoids, while late types are disk galaxies with active star formation. The differences between these two types create a bimodality in the Color-Magnitude distribution of galaxies. The two populations have a nontrivial region of overlap between them, termed the Green Valley, through which past attempts have been made to place a quantitative divider that splits the two populations on the basis of color. Pulling from the most recent data release of the Sloan Digital Sky Survey, this study seeks to improve upon these attempts by using a larger sample size (particularly at high luminosities), and by considering morphology and spectral information. The spectra of galaxies can tell us whether there has been recent star formation, and whether the galaxy’s central black hole is actively accreting matter (known as an Active Galactic Nucleus, or AGN). The populations were separated on these bases, as well as color, and using mathematical modeling and statistical fitting methods, we were able to find an effective divider in each case. The resulting dividers help us probe galactic populations within the Green Valley, specifically those galaxies which contain an AGN.