Lawless Mexico and The Ungoverned Citizens of the Autodefensa Movement 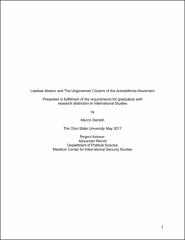 Mexico is ungoverned, on the verge of failing and local law enforcement cannot penetrate regions so crime ridden that lawlessness prevails. Self-policing militias known as ‘autodefensas’ are the exception to these claims, rising from municipalities exhibiting varying degrees of crime, indigenous population density and economic inequality. Yet none of these factors explain their origination because they are not necessarily indigenous, particularly crime ridden or display levels of poverty necessary to distinguish the regions where they are active from ones where they are not. Perhaps the autodefensa movement is best described as an armed form of protest designed to highlight societal ails legitimated by the 'genuine' ties indigenous people have to land. Precedent backs this claim because the Zapatista Rebellion and a social efficacy movement in Oaxaca opened the door to violent social protest in Mexico decades prior. Through the use of census data this contribution will distinguish between municipalities that utilize self-policing and ones that do not, comparing the effects of crime, proportional levels of indigeneity and economic inequality in Mexico.