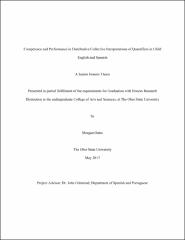 Crosslinguistically, children who are otherwise linguistically mature tend to assign a collective interpretation to quantifiers that are typically construed as distributive (each/cada) by adults; similarly, in distributive contexts, children accept quantifiers that adults interpret as collective (some/unos, the/los). The Pragmatic Scale Hypothesis proposes that collective and distributive meanings sit on a pragmatic scale, anchored by each/cada, which represents the distributive extreme of the scale with meaning derived through entailment. In contrast, some/unos and the/los derive meaning through a conversational, scalar implicature that is generated by virtue of the weaker informativeness of these quantifiers, relative to the stronger informativeness of each/cada. From this hypothesis come the following predictions: 1) Lexical development should predict children’s abilities to reject distributive each/cada in collective contexts, as we expect such entailments to develop in tandem with denotative content in the lexicon. 2) Lexical development may also be predictive of children’s abilities to reject collective some/unos and the/los in distributive contexts, as their meaning is indirectly inferred from the pragmatic scale, anchored by each/cada. 3) If scalar implicatures result from inferences drawn using non-linguistic cognitive performance abilities, then such abilities may be predictive of the ability to reject a quantifier in an incongruent context. We recruited 60 typically-developing 7 and 8 year-olds in Ohio and Puerto Rico. 31 were monolingual Spanish-speakers (mean age=95.25 months, SD=7.43) and 29 were monolingual English-speakers (mean age=95.38 months, SD=7.65). Children were given a video-recorded Truth-Value Judgment Task to measure their interpretations, as well as standardized tests of vocabulary, inhibition, working memory, and attention. Results confirmed predictions and support the Pragmatic Scale Hypothesis.