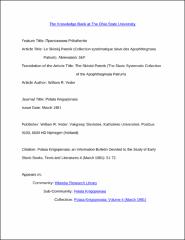 Polata knigopisnaia 4 (March 1981) publishes studies that were prepared in advance of the Symposium on the Transmission and Reception of the Early Christian Paterika, held in Nijmegen, Holland, April 6-8, 1981. The conference is reviewed in Polata knigopisnaia 6 (December 1982): 64-66.

Veder discusses the name of the Skitskii Paterik (SkP), describes its structure and content (51-54) including an inventory of its Slavic components (54-62), and provides a list of manuscript shelf marks and their repositories that contain texts of the various families of SkP, as well as of epitomes and fragments (63-67). The origin of the SkP paterik is reviewed (67-68) as is its Greek prototype (68-71); a list of bibliographical references is included (71-72).