Aza-peptide Aldehydes and Ketones: A New Class of Inhibitors for Proteases 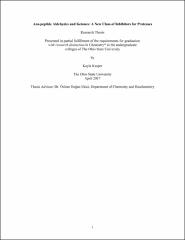 Proteases are enzymes that catalyze the hydrolysis of specific peptide bonds in proteins, a process referred to as proteolysis. Proteases are largely responsible for processes such as apoptosis, immune response, protein turnover, digestion, blood coagulation and wound healing, fertilization, cell differentiation and growth, and cell signaling among other processes. Thus, uncontrolled proteolysis can lead to many disease states, such as cancer, neurological disorders, viral infections, inflammation, and arthritis. Aza-peptide aldehydes and ketones are a new class of inhibitors designed to inhibit the proteasome and the clan CD cysteine proteases for the potential treatment of cancer and neurodegenerative disorders. These compounds are designed starting with the structure of a good target protease substrate structure. The α-carbon of the P1 amino acid residue is replaced with a nitrogen atom to make an Aza-amino acid residue and the scissile peptide bond is replaced with an aldehyde or ketone moiety. Aza-peptides are more rigid than their peptide analogs due to the inability of the N-CO bond at the P1 site to rotate. We hypothesize that the rigidity of aza-peptides makes these inhibitors more selective, as other proteases will be unable to accommodate this rigidity while the proteasome and the clan CD cysteine proteases will be able to. Here I will present the synthesis and the kinetic inhibition study of the first examples of the proteasome and the clan CD cysteine protease specific aza-peptide aldehyde and ketone inhibitors.