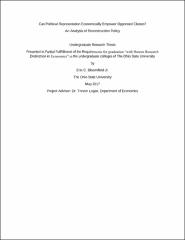 In politics, representation in government is often thought of as the most salient means by which an oppressed class of people can improve their standing and raise themselves out of subjugation. The Reconstruction South featured a great influx of African-Americans into political office during the 1860s and 1870s, which allows us to question: did representation affect the material lives of black southerners after the Civil War? By wedding historical record and econometric analysis, I have found that there was largely little effect of black representation in government on black landownership and accumulation of wealth while there was a short-lived effect on income. During this period, many African-American officeholders sought to effect black landownership by increasing taxes on unused acreage within large plantations. Politicians decided against pursuing forced seizure of land to redistribute, and instead chose to incent landowners to sell their unused land. This economic incentive was meant to force a redistribution of land to poorer citizens. However, my analysis shows that this was not successful. Regression analysis shows a relationship between per capita county taxes in a county and a decrease in the number of large farms there. Yet, there is no demonstrable relationship between black political representation and black ownership of small, yeoman farms. Historical accounts indicate wealthy landowners as well as speculators from both the North and South purchased this land for their own means. As this policy backfired, tenant farming and sharecropping became entrenched southern institutions preventing black accumulation of wealth and increasing profits for white landowners. In counties that had black political leadership, there was an effect of increasing rates of tenant farming over sharecropping through taxes. Though this represents an increase in incomes at the time, this income could not translate to sustained wealth. As modern black poverty largely stems from denial of wealth accumulation over centuries, these results help paint a broader picture of representation politics and their failure to tame systemic and market forces at play in American society.