A Numerical Simulation of a Tsunami Generated by a Submarine Landslide, Offshore Puerto Rico 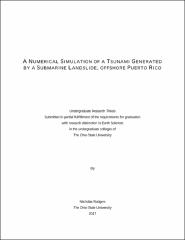 The deepest part of the Atlantic Ocean is an area north of Puerto Rico known as the Puerto Rico Trench. Bathymetry data of the trench were acquired from the US Geological Survey and can be used to locate areas where the seafloor failed and created a marine landslide event. These events leave behind amphitheater-like cutouts in the cliff known as headscarps. In 1918 Puerto Rico experienced an earthquake and tsunami, leaving behind 116 dead. Surveyors were sent after the event to record damage and the data can be used today to study the tsunami. The tsunami is traditionally believed to have been caused directly by the earthquake. This project investigates the possibility that the earthquake caused a submarine slide instead. Previous studies have looked at different possible headscarps. However, few have used the tsunami model, GEOWAVE. This model is used best in shallow water which is applicable in this case. The simulation of the chosen slide resulted in realistic wave heights and speeds. However, not all of the simulated data agree with the reported data. Arrival times specifically are greater in the simulation than they were reported. This suggests that while a slide is a reasonable cause for the tsunami the location of the slide should be looked at further. The results from this project will be valuable those studying marine landslides in the Puerto Rico area. Knowledge of the possible tsunami risk associated with a landslide is very important from a risk assessment standpoint.