Sex Differences in the Prophylactic Effects of Ketamine as an Antidepressant 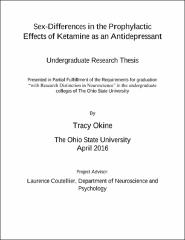 Stress-related mood disorders are more frequently observed in women. Females mice have been shown to have a more sensitive prefrontal GABAergic system (e.g. increased parvalbumin – PV – expression) following exposure to Unpredictable Chronic Mild Stress (UCMS), than males. The NMDA receptor (NMDA-r) antagonist ketamine is known to induce sex-dependent antidepressant like effects following exposure to stress in mice, possibly through NMDA-r expressed onto PV-expressing neurons. These findings suggest that sex-specific vulnerability to stress might be associated with differential sensitivity of NMDA-r on PV cells. To test this hypothesis, ketamine was given prophylactically in mice exposed to UCMS. Male and female C57bl/6 mice were assigned to a Control group, or a UCMS group. Subjects within each treatment group received a dose of ketamine (10mg/kg) or vehicle (0.9% saline) intraperitoneally (n=8/group) a week before the experimental period. Mice were then tested in the Open Field (OF) and Forced Swim tests (FST) to measure anxiety- and depressive-like behavior, and in the Object Recognition Test (ORT) to analyze cognitive functions, and their brains were collected after the behavioral testing period. To evaluate ketamine’s short term effects, a second group of 10 males and 10 females received an equal dose of ketamine, and their brains were collected and analyzed 7 days later. Brains were assessed for mRNA expression of NMDA-r glutamate receptor subunit proteins Grin 1 and Grin 2a, and PV. RT-PCR analyses reveal sex-specific effects of ketamine on mRNA expression of Grin1, Grin 2a, and PV in the PFC that suggest a better drug response in males, than in females. Similarly, behavioral data show that ketamine prevents the depressive-like phenotype in UCMS-exposed males, but not females. Ketamine did not prevent UCMS-induced anxiety-like phenotype in males and females, and did not prevent induced cognitive deficits in males. Altogether, our data demonstrate that inactivation of NMDA receptors prior to stress might provide resilience to stress-induced depression in males, but not in females, suggesting sex-specific molecular mechanisms to stress vulnerability.