Medieval Women Go to Court: The Armburgh Papers and the Role of Women in Court in Medieval England 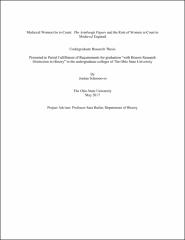 This paper investigates the legal battles of Joan Armburgh and her family, specifically a question of inheritance. Joan and her third husband, Robert Armburgh spent over twenty years disputing the claims of Joan's nieces to inherit half of the family estate. The paper focuses on the tactics used by the women in question, as well as examines briefly the roles that men played in the court cases as they unfolded, and offers an overall perspective of the lives of medieval noblewomen for context. Joan and her nieces spent more than twenty years in court battles over the questions of legitimacy and inheritance, and after careful examination it appears that these women played the driving force in the legal battle. Although legally they were not able to appear by themselves, they appear to have played a vital role in securing social patronage and providing necessary background for the court cases.