Effects of Exposure to Aggressive Bumper Stickers on Driving Behavior 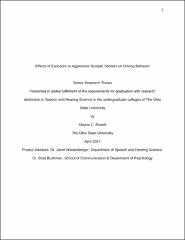 Aggressive driving behavior, as defined by the National Highway Traffic Safety Administration, has been directly connected to increases in vehicular accidents (Nhtsa.gov, n.d.). Aggressive driving behavior is often elicited when another vehicle performs an action that frustrates or impedes the driver. Unanswered questions center around what exactly causes aggressive driving and why it is prevalent in today’s society. The present study investigates whether drivers exhibit more aggressive behaviors when exposed to aggressive content that is tied closely to other human actors in the scenario, when the other human actors in the scenario are of divergent values or beliefs, or whether the actions of these other individuals alone are sufficient to elicit aggressive responses from the driver. This question was addressed by placing bumper stickers with aggressive or divergent-value content on other vehicles in a driving simulation scenario that committed frustrating acts towards the driver. The bumper stickers specifically reflected either neutral content (e.g., Five Tops) or aggressive content (e.g., Cruel Attacks), or reflected in-group affiliation (e.g., Buckeyes) or out-group affiliation (e.g., Wolverines). Participants completed a pre-designed, frustrating course in a realistic motion-base driving simulator. Measures of driver behavior (speed, following distance, time off road), cognition (word completion), affect (aggressive mood), physical arousal (heart rate/blood pressure), and trait anger were collected for drivers exposed to neutral-content and in-group bumper stickers versus aggressive-content and out-group bumper stickers in the driving scenario. It was expected that the aggressive-content and out-group bumper stickers would elicit more aggression on all the measures when compared to the neutral-content and in-group bumper stickers. Results showed a significant effect of aggressive bumper stickers only on word completion. External stimuli had no significant effects on mood, physiology, or driving behavior. However, examination of pre-driving measures of trait anger showed that participants assigned to the neutral content group actually had significantly higher trait anger than those assigned to the aggressive content group. This may have created a sort of “leveling” effect that would have reduced differences in performance across groups. This factor will be explored as a co-variate when data collection is completed. Possible additional explanations for the lack of an effect on the other measures are discussed.