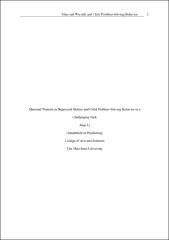 Using a sample of 66 mother-child pairs, this study examined maternal warmth in a depressed mother and child problem-solving behavior during a challenging puzzle task. Maternal warmth was investigated on 3 dimensions: Mother positive emotion expression, mother comfort, and quality of the mother-child relation. Participants were recruited from the Columbus, Ohio area, with mothers who had depressive symptoms and had a child who was 5-years-old. The dyads were asked to complete three puzzle tasks, and participants’ emotions and behaviors were later coded. Results supported that mother positive emotion was positively associated with child persistence on the task; the quality of the mother-child relationship was negatively associated with child negative emotional arousal. However, mother comfort was positively associated with child negative emotional arousal and child discouragement behaviors, which was not expected. Results also showed the impact that family SES and mother depression had on child problem-solving behaviors. Further research could investigate child self-soothing behavior and its association with child negative emotional arousal.