Shakespeare on the Silver Screen: Adapting "Romeo and Juliet" for Contemporary Moviegoing Audiences 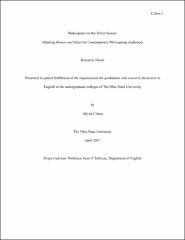 In Reading (and Writing) the Ethics of Authorship: “Shakespeare in Love” as Postmodern Metanarrative, Todd F. Davis and Kenneth Womack casually defend Shakespeare in Love through the lens of the postmodern desire to layer narratives. The moments in the film that Davis and Womack cite as being ‘metanarrative’ often imbue the film with an originality that, in my humble opinion, dismantles the recriminations of “some critics in the intelligentsia” who “question the artistic significance of the film’s postmodern aspirations" (Davis and Womack 153). Shakespeare in Love merely references Shakespeare and his texts. However, a vast number of films exist that directly adapt the playwright’s theatrical pieces. Romeo and Juliet, from which Norman and Stoppard seem to have derived inspiration in the creation of Shakespeare in Love, is no stranger to film adaptation. From George Cukor’s black-and-white film of 1936, to Baz Luhrmann’s tacky, gangster drama of 1996 and Carlo Carlei’s miscast and misdirected Romeo & Juliet of 2013, the play has received cinematic treatment from several directors in several decades. Disregarding critical and popular opinion, I have enjoyed looking at the ways in which the three most recent adaptations of Romeo and Juliet, with the addition of Shakespeare in Love, compare with one another and with Shakespeare’s play text. Beginning with Franco Zeffirelli’s 1968 film and ending with Carlei’s, I delve into the specific ways in which these directors appeal to popular audiences through theme and character. I discuss the language of the cinema and the necessity of actively engaging with film in order to read this language. Ultimately, I conclude that the benefit of these films lies, not in their allegiance to Shakespeare, but in the changes they see fit to make to a tragic love story that surpasses authorial and temporal boundaries.