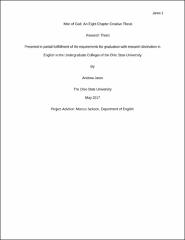 This eight-chapter creative piece follows three gang members in a crime syndicate known as the family as they try and capture the individuals that have been stealing illegal liquor from their organization during the midst of the Great Depression. However, their task proves more difficult than previously thought, as they must come to terms with their role in the family and the complex motivations of the men stealing from them.