The Effect of Music Tempo on Physical Activity 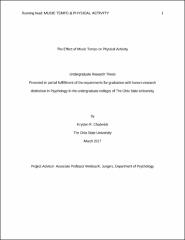