Seawater 87Sr/86Sr Stratigraphy of the Middle Ordovician in Central Virginia 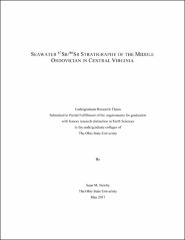 Throughout most of the past century, the correlation of strata in a region has mainly been defined through biostratigraphy, the dating of rock through fossil succession. However, work over the past several decades has put increasing emphasis on dating rock formations through chemostratigraphy. This process utilizes secular trends in ancient seawater chemistry preserved in fossils and rocks, which can, in some cases, provide more accurate dating of strata. This project utilized the 87Sr/86Sr seawater curve and existing δ13C data to more accurately date the New Market Formation and underlying Knox Unconformity in central Virginia, which are approximately Middle Ordovician in age (~470–458 mya). The age of the New Market Formation has been studied previously near Collierstown, Virginia, primarily through conodont biostratigraphy. The Knox Unconformity forms the base of this formation. This major erosional unconformity occurs through much of eastern North American and represents a fall in relative sea level, and with this work, can be dated at Collierstown to terminate around 462.5 Ma. The cause of this unconformity is either through cooling climate that lowered sea level or regional tectonic uplift and mountain building raising the seafloor above sea level. This Sr isotope study suggests that sea-level changes are more effectively correlated to the unconformity, but the presence of regional uplift is still an important feature towards understanding the processes occurring. Either can have major ramifications for the development of life on Earth around this time, and a more accurate date for this unconformity can better explain the sequence of events that spurred one of the major adaptive radiations in history, the Great Ordovician Biodiversification Event (GOBE), a major ecological change related to the rise of the Paleozoic fauna.