THE DESIGN AND CONSTRUCTION OF AN AXENIC SYSTEM, AND THE SURVIVAL, GROWTH, AND BASELINE MICROBIAL LOAD OF THE REARING ENVIRONMENT, FOOD SOURCE AND INTERNAL MICROBIOTA OF A CICHLID FISH 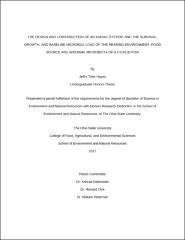 A novel axenic apparatus was designed and constructed for use as a research platform in germ-free fish larvae culture and the development of antibiotic alternatives. The system contains many innovations to the systems most used in germ-free aquaculture research today. Using a cichlid (Synspilum) species and a cichlid hybrid (Synspilum x Amphilophus), the system was tested under holoxenic conditions to ensure that fish can survive in such an apparatus. The system has six chambers, of which three were stocked with Synspilum and three with the hybrid (n=15 each). Two control tanks were set up and one was stocked with the Synspilum and one with the hybrid (n=45 each). The experiment was run for a duration of 16 days. Survival and growth (length, mm and weight, g) measured and compared between the Synspilum and the hybrid, as well as individuals reared in the apparatus and those in control tanks. Using microbiological culture techniques, a baseline bacterial load was determined for the rearing environment, the feed source, the source water, and the fish gut, within the apparatus and a set of control tanks. These were compared for Synspilum and the hybrid, as well as for individuals in the apparatus versus those in control tanks. Using R statistical software to perform a statistical analysis, no significant differences were found in survival between groups (two-sample t (5.311) = -1.528, p= 0.184). Significance did occur in a linear model comparing the final length and survival (F1,6= 5.529, p= 0.0569, α= 0.1, adjusted R2=0.392). However, no differences were found in fish length or weight (two-sample t (5.162)= 1.443, p= 0.207; two-sample t (5.919)= -0.348, p= 0.740).It was determined that the baseline bacterial load of the chambers and tanks were not significantly different (two-sample t (1.007)=-1.018, p=0.493). Also, no differences were found in the baseline bacterial load of the fish gut between those in chambers and in tanks (two-sample t (1.007)=-1.018, p=0.493). The maximum bacterial load observed in the rearing environment was 2.26x106 CFU/ml, and 1.800x106 CFU/ml for the three-fish PBS-sample suspension (Phosphate buffered saline). These are considered the baselines. These findings reveal that Synspilum and Synspilum x Amphilophus perform similarly to each other and within the apparatus and control tanks under holoxenic conditions. This is evidence that the apparatus is ready for further testing under axenic conditions and that these fishes are good model species to use within the system.