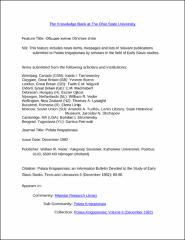 This feature, "ОБЬЩЕѤ ЖИТИѤ" [Ob'shtee zhitie], provides a list of ongoing projects and recent publications of scholars in the field of Early Slavic studies, arranged alphabetically by the country in which they work. Represented in this issue are reports from Canada, Great Britain, Hungary, the Netherlands, New Zealand, Romania, the Soviet Union, the United States of America, and Yugoslavia.

In this feature, scholars have submitted lists of their publications or announced current projects underway. William R. Veder's report (82-84), however, also includes "Notes on an Archaeographic Expedition to Leningrad and Moscow (19 APr - 26 May 1982)." There are interesting editorial comments in a number of the entries and the two institutional reports concern access to the repositories' manuscripts. Regarding the Lenin Library (86): "The 'Literaturnaia gazeta' of 15 Sept 1982 contained a letter to the editors ... voicing serious concern with the effects of work in progress in the new metro-station 'Borovickaia' on the Pashkov House, where the Manuscript department is housed in one of the wings. If the Pashkov house were to suffer damage and need extensive repairs, the consequences for work on the manuscripts would be as serious as the recent 1 1/2 years' closure." The report from the State Historical Museum indicates that it will be closed for extensive renovation for as many as three years (86).