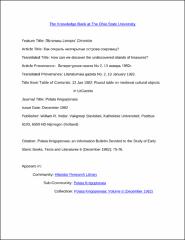 Lietopis’: 13 Jan 1982: Round table on medieval cultural objects in LitGazeta
Chronicle: How can we discover the undiscovered islands of treasures? [Literaturnaia gazeta No. 2, 13 January 1982]

The editors of Polata knigopisnaia comment on an article from Literaturnaia gazeta ('The Literary Gazette'), regarding Soviet monuments of culture (including manuscripts) abroad. They note the growing interest in these objects, citing various articles that have recently appeared in the Soviet press, for example, the topic of an article from October 21, 1981, was about Georgian cultural objects on Mount Athos and Mount Sinai. The editors of Polata knigopisnaia responded with a letter to Literaturnaia gazeta, welcoming the discussion of the issue at a higher level and in a broader context, citing the manuscript work done by scholars abroad, and suggesting a mutual agreement on cultural and scholarly collaboration, which would link the USSR with many countries of the world. Of major importance in this endeavor would be the access and description of hitherto fore hidden treasures in world repositories, great and small.