A Study on the Inhomogeneous Differential Equation 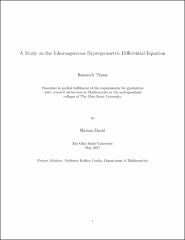 The hypergeometric differential equation is a linear second order differential equation with two singularities in the complex plane and a third at infinity, all three singularities being of Fuchsian type. Hypergeometric equations are complicated enough to display strange behavior of solutions, but simple enough to be well understood. By contrast, solutions of Heun equations, which have three Fuchsian singularities in the complex plane and one at infinity, are still not well understood. We study the regularity of solutions of the inhomogeneous hypergeometric equation. This equation appears in multiple applications, such as the blowups of wave maps and is also an approximation for more complicated equations with more singularities. We find that with an inhomogeneous term, there exists a unique solution that is analytic at both singularities, provided that the parameters of the equation satisfy explicit conditions. For general parameters, when the integrals are divergent, we consider the Hadamard finite part of these integrals. More precisely, we have established a unifying approach to representing analytic functions. We have reformulated the classical theory of expansion in terms of Jacobi polynomials with the idea of using the Hadamard finite part of the possible diverging integrals. A second proof is given as follows. With a change of variables and expanding the forcing term into a Fourier-type series in Jacobi polynomials, the solution is obtained as a series in these polynomials, which is convergent on the ellipse with foci at zero and one.