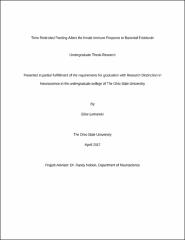 Circadian rhythms have a regulatory effect on immune function. The immune system has circadian fluctuations in gene expression regulated by circadian clock proteins activation of important transcription factors in the immune system. Experimentally induced circadian disruption, through both genetic ablation of clock proteins and exposure to light at night impairs immune function. Although light is the primary entraining factor for circadian rhythms, timed feeding can entrain peripheral clocks. Time restricted feeding can shift circadian rhythm function in the liver independent of light and the SCN. Time restricted feeding has been used to study the effects of circadian rhythms on metabolic diseases, but the relationship between time restricted feeding and immune function is unknown. Because of this, we tested the hypothesis that temporal desynchrony of food intake alters immune responses. Sixty adult male Swiss Webster mice were given food either at night, during the day, or ad libitum. After four weeks, half the mice received an injection of lipopolysaccharide (LPS) as an immune challenge and half received a saline injection. Three hours later liver, adrenal, and overall mass were all measured. Cytokine gene expression was measured by using qPCR in the liver, spleen, and hypothalamus. The bacteria killing capacity of the serum against Escherichia coli was measured as a functional immunity assay. Mice that only had access to food during the day, the ‘wrong’ feeding time for nocturnal animals, had suppressed cytokine response and did not have the enhanced bacteria capacity in response to LPS in comparison to night restricted or ad-lib fed animals. These data suggest that mistimed feeding has a detrimental effect on immune function independent of body mass, and provide further evidence for the integration of the circadian, metabolic, and immune functions.