Pride and Prejudice in Film Adaptations 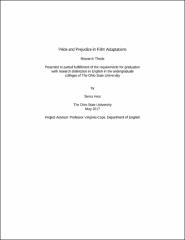 Jane Austen’s Pride and Prejudice, published in 1813, is commonly mistaken as a novel purely about romance. It was published at a time when social class determined a family’s status, a patriarchal tradition limited women’s property rights, and marriage was the expected vocation of women of the middle and upper classes. Austen specifically uses the fates of her female characters to comment on the position of women in English society. The Bennets’ only children, five daughters, need to marry well before their father dies, because upon his death the family estate and income will go to his nephew. Elizabeth Bennet refuses to marry without love, in keeping with modern notions of marriage, but one which imperils her future, given the very small inheritance she will share with her sisters. Although a story that ends in multiple marriages, the novel is no mere love story but a commentary on issues of women’s rights during Austen’s time. However, the popular film adaptations of the novel (from 1940, 1995, and 2005) tend to downplay these issues in favor of romance. Analyzing how British and American films adapt the novel in the 20th and 21st century gives insight into contemporary attitudes towards efforts at expanding women’s rights in the era in which the films were made. All three films remove important characters and scenes while adding invented ones in ways that suggest an unwillingness to accept some of the radical implications buried in Austen’s tale. For example, the 1940 film comes at a time when the United States is on the brink of entering World War II, an interesting influence because it necessitates a downplay of 18th and 19th century British class issues, one of the most prevalent concerns in the novel, in order to preserve relations between the allies. Pride and Prejudice was written when the ideal of patriarchy governed legal and social expectations and ancient ideals about rank still prevailed. The novel explores the limitations that Elizabeth Bennett faces in both spheres. The films vary greatly in how they handle these issues, some expanding and some retracting from her influence in the novel. As in the novel, the 1940 adaptation pits woman against woman, portraying a power struggle between Elizabeth and Miss Bingley, for example, but it considerably plays up the idea. In all the adaptations, certain scenes are deleted or created for the films that take power from the female characters we see in the novel. It leaves us wondering if Austen was more radical than we are today. In conclusion, each film adaptation of Pride and Prejudice lends insight into contemporary attitudes towards women’s rights in the time in which they were produced. Intriguingly, other adaptations of nineteenth-century British novels also have problematic films. In adaptations of another Austen novel, Persuasion, and of Charlotte Bronte’s Jane Eyre, issues of women’s rights and class conflict are also downplayed to emphasize romance. This project will compare these adaptations to shed light on the complicated film history of Jane Austen’s most popular novel.