Cultural Similarities and Differences of Social Comparison on Instagram 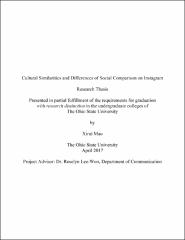