From the Atom to the Grain of Sand: Ascending the Stoppardian Ladder 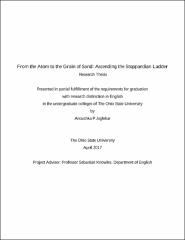 Tom Stoppard, celebrated British playwright of the last half a century, is known to manipulate a familiar situation by introducing an element of speculation, often verging on the absurd, and then indulging in a dialectic that tickles the intellect but ultimately remains unresolved. Drawing from pop culture, politics, and literary history, Stoppard’s art features a range of topics, and given his propensity to transcend boundaries, being confined to one issue is impossible in a Stoppardian setting. Arcadia (1993), Hapgood (1988), and The Hard Problem (2015) are three of Stoppard’s plays which are centered around popular scientific breakthroughs made over the past two hundred years. This essay explores the interplay of these scientific concepts with components of human identity and behavior, tracking Stoppard’s evolving ideology and the increasing preoccupation with which he engages in recurrent themes. Since these three plays are in dialogue with one another, as well as with the rest of Stoppard’s plays, they all attempt to distill out the essence, or the ‘real thing’ of some aspect of humanity. The search for meaning of life is eternal, and with each discovery science gets us closer to an implication for the big picture. Very calmly and yet sometimes stormily Stoppard flirts with passion, intolerance, knowledge, art and identity. My essay attempts to expose different elements at play within the Stoppardian paradigm and uncover a relative or absolute truth.