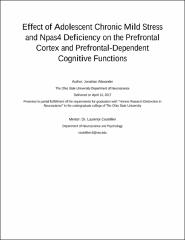 Chronic stress exposure in adolescence has been shown to impair cognitive function, especially in individuals with genetic vulnerabilities. Despite this, there is little known about what mechanisms are underlying how these genetic predispositions and environmental factors present in adolescence cause cognitive impairments. During adolescence, the GABAergic system of the prefrontal cortex (PFC) undergoes a spike in development that may leave the area vulnerable to these kind of genetic and environmental factors, thus contributing to observed cognitive changes. Npas4 is well established as an important protein relating to plasticity and inhibitory synaptogenesis in the hippocampus and cortical areas, and Npas4 expression has been found to be suppressed by general stress and corticosterone, correlating to significant memory, cognitive, and social deficits in mouse models. Furthermore, our lab has recently demonstrated that Npas4 plays a significant role in adolescent prefrontal maturation. Together, these findings suggest that Npas4 might be a mediator of adolescent stress exposure on prefrontal-dependent impairments. In this study, we aimed to uncover the mechanisms by which Npas4 modulates the effects of stress on cognitive functions and brain structures. We hypothesized that Npas4 under-expression and exposure to chronic mild stress (CMS) in adolescence would produce PFC-derived behavioral changes and abnormalities in brain structures after development. To this end, we developed a mouse model demonstrating the effects produced by Npas4 knockdown and adolescent stress on relevant cell populations and myelination in the prefrontal cortex and prefrontal-dependent cognitive function. We compared Npas4 wildtype and heterozygous mice, chronically stressed in adolescence, and assessed PFC-dependent cognitive functions, including cognitive flexibility through the attention set shift task. mRNA levels of important biomarkers of myelin and the cell death process in the PFC were measured using RT-qPCR, and the number of neurons and oligodendrocytes, and myelination density in the ventromedial PFC (vmPFC) as quantified through immunohistochemistry (IHC) to evaluate cell death and myelination loss in the prefrontal cortex. We observed a trend towards cognitive flexibility impairment through the extradimensional shift phase of the attention set shift task and a trend towards reduced mRNA expression of the myelin basic protein (MPB) along with significant changes in PLP/DM20 and Caspase-3 in heterozygous Npas4 mice exposed to chronic stress. This data did not correlate with a reduction in neuron or oligodendrocyte populations, and there were no marked changes in myelination density. Discovering if the interaction between stress-exposure and Npas4 deficiency in adolescent mice produce any structural changes in the PFC would help progress the understanding of how stress in adolescence affects the developing brain. From here, other factors could be determined and structural changes identified. Through these, methods of identification of susceptible individuals and potential interventions could be assessed.