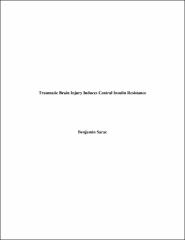 TBIs produce a wide-range of neurological issues including, but not limited to, subdural hematoma, cognitive deficits, and in extreme cases, death. Although many mechanisms and consequences of TBI are well studied, there remains a gap in the understanding of the mechanisms by which repeated TBIs result in worse deficits than single injuries. Our lab has previously shown that repeated injuries occurring close in time impair the brain's metabolic recovery. In order to better understand the molecular mechanisms underlying the metabolic crisis associated with repeated TBI, we focused on central insulin signaling in mice injured once or twice, 24 hours apart. Insulin sensitivity assays were conducted by treating brain slices with insulin and measuring phosphorylation of Akt (protein kinase B) by Western Blot. Results showed that TBI induces brain insulin resistance by two days post-injury (DPI), which recovers by seven DPI in once-injured mice, but persisted until 28 DPI in mice that were injured twice. Further, obese (thus whole-body insulin resistant) mice that underwent TBI showed longer lasting reductions in Akt signaling. Further investigation of the mechanism by which brain tissue becomes insulin resistant may aid in the understanding and treatment of patients having undergone a TBI.