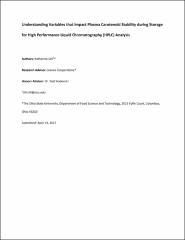 Carotenoids are pigments ubiquitous in fruits and vegetables and noted as bioactive compounds affecting health. Understanding the relationship between carotenoids and health relies on precise and accurate analytical methods. The goal of the project was to understand factors that affect the stability of carotenoids from human plasma. If samples could be stored for a longer period of time, there would be more flexibility to extract samples, store and analyze in batches without fear of carotenoid degradation. Human plasma was obtained and tested for initial levels of carotenoids. The plasma was aliquoted, frozen, thawed and extracted according to a previously published procedure. The fat-soluble fraction was dried under nitrogen gas and stored in glass vials at 4°C, -20°C, and -80°C and stored for total of 120 days. The samples were removed, redissolved in methyl tert-butyl ether and methanol, and analyzed using HPLC, all in triplicate. Carotenoid levels (lutein, zeaxanthin, beta-cryptoxanthin, alpha-carotene, beta-carotene, other-cis-lycopene, all-trans-lycopene, 5-cis-lycopene, total lycopene, and total carotenoids) were quantitated at each time point and compared using two-way ANOVA and Tukey’s posthoc test, with significance at P<0.05. Storage time had a significant effect for all compounds, and the interaction between the storage time and temperature was also significant for several carotenoids. However, the carotenoids were much more stable during storage, especially in the refrigerator, than expected. This information will be useful for future studies on carotenoids, depending on the compounds of interest, by optimizing storage conditions and efficiency, while preserving key compounds.