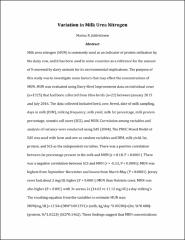 Milk urea nitrogen (MUN) is commonly used as an indicator of protein utilization by the dairy cow, and it has been used in some countries as a reference for the amount of N excreted by dairy animals for its environmental implications. The purpose of this study was to investigate some factors that may effect the concentrations of MUN. MUN was evaluated using Dairy Herd Improvement data on individual cows (n=1325) that had been collected from Ohio herds (n=22) between January 2015 and July 2016. The data collected included herd, cow, breed, date of milk sampling, days in milk (DIM), milking frequency, milk yield, milk fat percentage, milk protein percentage, somatic cell score (SCS), and MUN. Correlation among variables and analysis of variance were conducted using SAS (2004). The PROC Mixed Model of SAS was used with farm and cow as random variables and DIM, milk yield, fat, protein, and SCS as the independent variables. There was a positive correlation between fat percentage present in the milk and MUN (r = 0.18, P < 0.0001). There was a negative correlation between SCS and MUN (r = -0.13, P < 0.0001). MUN was highest from September-November and lowest from March-May (P < 0.0001). Jersey cows had about 2 mg/dL higher (P < 0.0001) MUN than Holstein cows. MUN was also higher (P < 0.001) with 3x versus 2x (14.62 vs 11.12 mg/dL) a day milking’s. The resulting equation from the variables to estimate MUN was: MUN(mg/dL)=12.54+(DIM*0.001291)+(milk, kg/day *0.00284)+(fat, %*0.488)-(protein, %*1.0123)-(SCS*0.1462). These findings suggest that MUN concentrations can be effected by many factors at the farm level in addition to nutritional feeding, and that it can be predicted from several production variables. Using this information can help dairy producers to best maximize profitability and reduce N excretion.