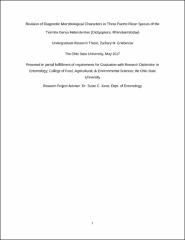 Termites of the genus Heterotermes Froggatt (Rhinotermitidae: Heterotermitinae) are pantropical subterranean wood-feeders capable of causing significant structural damage. Despite their economic importance, the taxonomy of Heterotermes remains understudied due to a lack of robust morphological characteristics enabling reliable identification. The aim of this study was to investigate a range of morphometric attributes in three species of Heterotermes previously identified by sequencing of two mitochondrial genes. All samples were collected from the Puerto Rican archipelago (Puerto Rico and Culebra Island) and attributed to either Heterotermes cardini (Snyder), H. convexinotatus (Snyder), or H. tenuis (Hagen). Soldiers were the only caste examined. Soldiers (n=99) were imaged and measured using the image-stacking AutoMontage program. Seven characters were measured on each specimen: mandible length, head capsule width and length, pronotum width and length, and depths of the anterior and posterior pronotal notches. These latter two metrics were novel to this study. From a subset of these metrics, three indices were derived from the ratios of (1) head width to length, (2) pronotum width to length, and (3) head capsule length to mandible length. Discriminant and cluster analyses determined that none of these traits, or combination thereof, were useful in reliably identifying Puerto Rican Heterotermes soldiers to species level. Examination of cephalic setae counts demonstrated that these data also could not be reliably used to distinguish soldiers of these three species. However, previous described characters of the soldier tergal setae were confirmed to be useful in discriminating H. tenuis from its Puerto Rican congeners. Additionally, I found that H. tenuis soldiers possessed long bristles (>100 μm) along the posterior margins of posterior tergites, excluding the pygidium, thereby providing another character for distinguishing the species.