The Effects of Linalool and Peppermint Aroma on Cognitive Performance 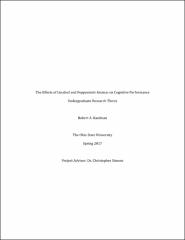 What if there was a way for people to perform better on tests, make less mistakes, and work more efficiently? Previous research has suggested that a person can achieve enhanced cognition and task performance simply by breathing the scents of certain natural substances. The amount of supporting research to back up these claims, however, is limited. This project seeks to understand the question of how peppermint and linalool (lavender) aromas affect cognitive performance. Its purpose is to provide a clearer understanding of the psychological and psychopharmacological effects (specifically regarding performance), if any, that these aromas can produce in human subjects. Subjects were evaluated in three separate conditions (no aroma, linalool aroma, and peppermint aroma) using the PEBL (Psychology Experiment Building Language) Math Processing Task, which involves answering simple math problems as quickly and accurately as possible. Results show that subjects exposed to the linalool aroma showed increased accuracy compared to their respective no aroma conditions, however, there was no effect on response time. Peppermint aroma did not have an effect on accuracy or response times compared to the respective no aroma conditions. These findings could have widespread application, including the ability to potentially increase accuracy or general task performance for people exposed to linalool. In addition, this study may open the door for further research on aromas to determine what other effects on humans or uses they could have.