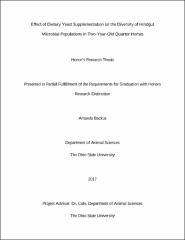 Dietary yeast supplementation has been reported to influence the gastrointestinal microbiome in multiple animal species, including horses, with varying results. The objective of this study was to evaluate the effect of a dietary live yeast supplement on the diversity of hindgut microbial populations in 2 yr old Quarter Horse mares. Eight Quarter Horse mares (2.0 ± 0.05 yr) were randomly assigned to one of two treatment groups: yeast or control. All mares received a basal diet consisting of 0.5% BW of a 14% CP pelleted concentrate, with water and mixed grass hay ad libitum and were housed in outdoor paddocks with access to shelter at all times. Mares in the yeast treatment group were fed a targeted dose of 2 g (4.5 x 109 cfu)/100 kg of BW per day of a live culture of Saccharomyces cerevisiae for 63 d. Fecal samples were collected weekly and pooled by treatment and week. DNA was extracted from the pooled fecal samples and subjected to PCR-DGGE with universal primers specific to 16S rRNA gene sequences to evaluate changes in bacterial diversity. PCR-DGGE images were analyzed using BioNumerics software to generate dendrogram comparisons based on the position and number of bands. There were no differences in band counts representing total bacteria between the treatment groups at the end of the study; however, the dendrogram indicated differences in the microbial profiles of horses fed the yeast supplement. Further investigation with Principal Coordinate Analysis (PCA) also revealed differences in the microbial profiles due to the dietary yeast supplementation. These findings suggest that dietary yeast supplements may influence microbial diversity in the equine gastrointestinal tract but further research using species specific primers is needed.